Why banks are in danger of becoming irrelevant. (And what they can do about it.) 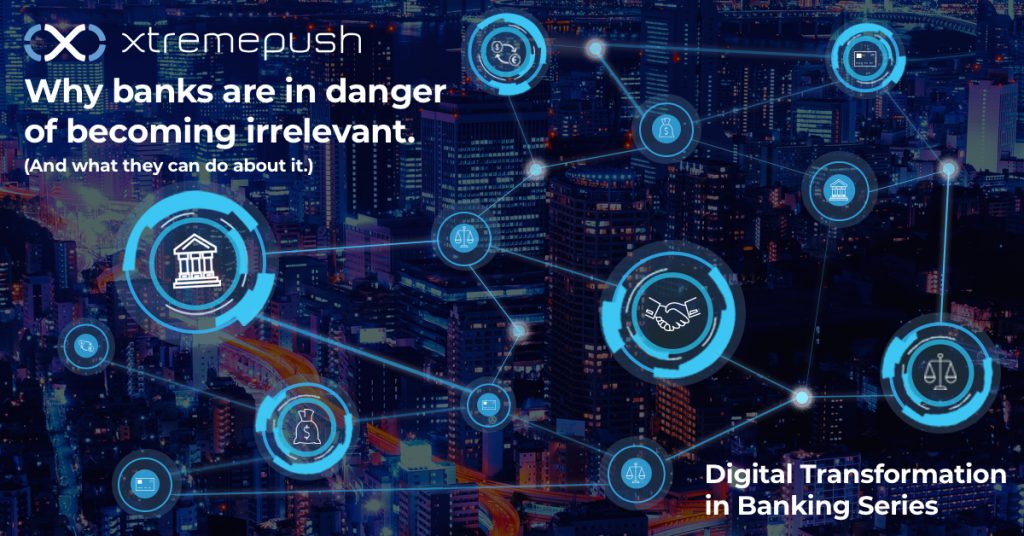 Traditional banks are at a crossroads. The digital disruption that we’ve seen sweep across other verticals, from ride-hailing in transport to streaming in media, has finally come for the banking industry.

Trust in the established banks has been eroded over the past decade, though work has been done to repair their public image. Of greater concern is the ambivalence of the younger generation towards them. 18-25 year olds have no attachment to their parents’ banks. They certainly don’t feel the same trepidation that their parents might have done about committing fully to a digital bank.

We have until now thought of the traditional banks as immovable fixtures. They have weathered countless market declines and toughened out global crashes, but the current danger poses a far greater threat to their future. It is no longer beyond the realms of possibility that a number of the established tier one financial institutions will go the way of Blockbuster, becoming irrelevant in the wake of digital-first challengers. Infact, for some, it is inevitable.

How have banks suddenly become so vulnerable and why have they not been able to adapt sooner? In this article, part one of a two part series, we’ll look at the scope of the challenge that faces the banking industry and where the threats are coming from, and begin to explore the key areas in which digital transformation is essential.

The first wave of digital transformation in this sector has come and gone, with a huge variance in success and scale. The rush to build websites and mobile apps that could support banking came at an enormous cost. Not every bank got it right. The legacy issues that made this process so challenging persist and have, in places, been compounded.

Fundamentally, many banks are still plagued by the decades-old IT that underpins much of what they do, from deposit accounts to mortgages and payment processing. The COBOL programming language, in which many of the banking systems were written in the 70s and 80s, is no longer taught, having been surpassed by a plethora of others including Java and Python.

Any new technology that is acquired needs to be integrated with the COBOL systems and that often proves very complicated. When a problem arises, it can be difficult to find someone who knows the answer.  The complexity of managing the existing IT infrastructure is an ongoing headache that infringes on the day-to-day operations of multiple departments.

Purpose-built digital solutions are therefore essential. Yet, adoption has been slow. Given these vast networks of technical challenges and years of cost-cutting in the fallout from the most recent crash in 2008, it is little wonder that some banks have been reluctant to embrace the second wave of digital transformation. The rise of the neo banks has forced their hand, however. 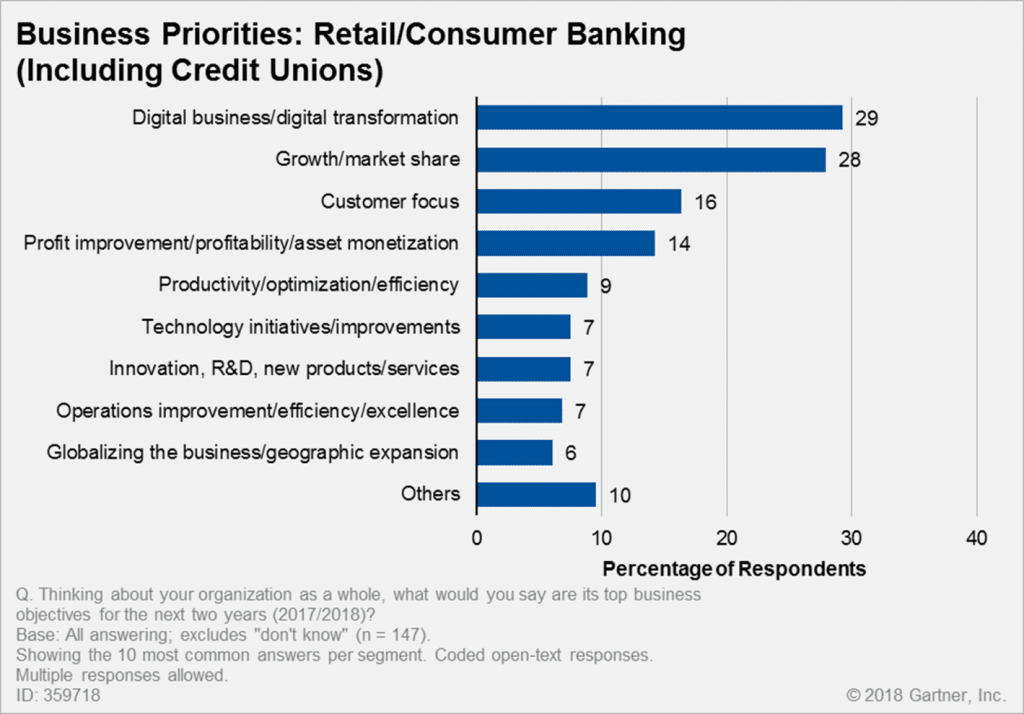 Rise of the neo banks

Although, on the face of it, the banking industry might seem an unlikely area for newcomers to gain a foothold in, the barrier for entry is suprisingly low. The E.U.’s Payment Services Directive in 2009 and its follow-up, PSD2, has made it easy for new players to enter the market. Similar legislation around the globe has opened up the field completely.

When almost every other aspect of our lives has been expedited by technology, it is no longer acceptable to wait in line to carry out basic banking tasks. The convenience, value for money and quality of transactional service that Revolut, for example, offers has seen the company grow at an exceptional rate. With over 4.7 million customers, and 12,000 more signing up every month, it is firmly established. The granting of its European banking license in December 2018 was another major milestone on the road to widespread adoption.

Although it is perhaps the most widely discussed, Revolut is by no means the only player in the market. Across the globe, in every jurisdiction, challengers are emerging to chip away at the established order. For example, Korean start-up Kakao Bank attracted over 800,000 customers, worth a reported $477 million in deposits and loans, within 4 days of its launch in 2017. In the U.K, Monzo recently announced it had reached the 2 million customer milestone. Founded in 2015, the company claims it is signing up 35,000 new customers every week. Already in excess of £10.7bn has spent through Monzo, with £2.9m sent between its users per day.

These neo banks are agile, unburdened by the legacy issues we’ve already mentioned, well-financed (with investors willing to play the long-game) and customer-focused. 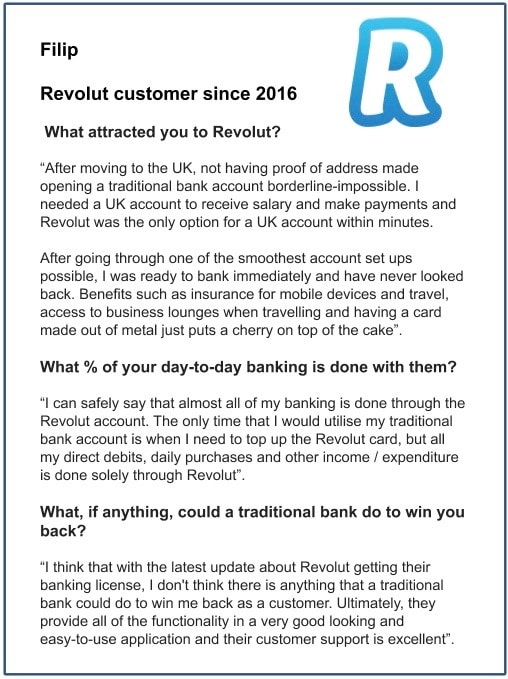 A Revolut customer’s perspective on the Challengers vs the Incumbents

As it stands, incumbent banks cannot match them for functionality and ease of use. Current accounts can be opened in minutes. Effortless, one-step money transfers, spending caps and even third-party service bundles like travel insurance are setting new standards in baseline service. Personalised, real-time messaging is creating the sort of bank-customer relationships that CRM managers dream about.

The Economist’s recent deep dive into the current banking landscape predicted two possible long-term outcomes, 1) the emergence of hybrid companies that fuse social media’s ability to gather proprietary data with the industry clout of a Wells Fargo and 2) the complete destabilising of banks altogether, ceding ground to the neo banks and leading to credit crunches and financial volatility on a global scale.

Catastrophising aside, one thing is certain; standing still is not an option. Irrelevant quickly becomes redundant.

What can banks do to compete?

The race is on for banks to overhaul their existing techstacks and rejuvenate their digital offering. The rewards for those who get this right, in terms of wallet-share and customer retention are vast. There are some examples of banks who have invested well in their digital offering and are fighting back against the challenger banks.

In a recent interview with The Banker, Gonzalo Gortázar, CEO of CaixaBank (one of the biggest financial service brands in Spain), disclosed that they are seeing a 50% increase in the number of digital transactions year on year. He also revealed that 25% of their digital clients engage with the bank every day (through either the app or website). Referring to digitalisation, he said “The further it goes, the better for the client”. He also spoke about the need to be adaptable and agile in the future.

Gortázar’s point about the future is crucial. It’s not about solving a problem for now, or even the next 10 years, it’s putting in place an open framework that can be continuously enhanced in line with the needs of the customers and the bank’s requirements down the line.

There are two central areas that must be addressed in order for traditional banks to extend their digital reach and remain relative going forward; the core banking solution and a total re-imagining of the customer experience (including the consolidation of customer data and analytical tools).

According to a report on the banking sector from Avanade, 19% of IT resources are currently tied up in maintaining the legacy systems. 94% of respondents to the same survey believed that modernising these systems would lead to a significant increase in revenue. The migration to a cloud-based core banking solution is the preferred route, but that is not without its potential pratfalls. The TSB incident looms large in the memory. This shouldn’t dissuade decision-makers completely, however. That was a highly specific case, and the £200million per year TSB were paying Lloyds Banking Group to piggyback their IT system perhaps caused them to rush the transition at an unmanageable pace.

Service providers like Temenos, Finastra, Infosys and Fiserv have all developed purpose-built systems that allows banks to accelerate their digital transformation relatively safely. We have also seen the emergence of the neo corebank service providers such as Leveris who offer a modular solution.

When it comes to beating the neo banks on experience, one of the biggest hurdles is the jumble of disconnected point solutions banks are using. Infact, 13% of the banking executives polled in the most recent Temenos report said that it was the largest challenge they faced in implementing a digital strategy. The data silos and inability to access customer analytics, yet another symptom of legacy systems, also received 13% of the vote.

The objective for banks is very clear; achieve a Single Customer View and use it to deliver personalised, real-time content that resonates with and engages customers as individuals. If channels can be consolidated into a single platform then data can be centralised, allowing banks to create smart, customer-centric and profitable campaigns.

Taking the next step

In part two of this series, we’ll look at the issue of customer engagement in greater depth. We’ll discuss practical ways in which banks can create better experiences and drive revenue across each of their channels.

Alternatively, you can get in touch with us directly to discuss how we’re helping banks to deliver relevant customer experiences and accelerate their digital transformation.